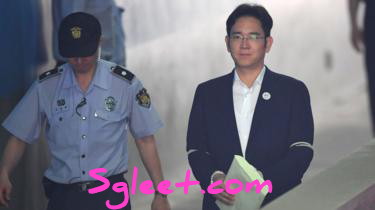 Mr Lee is facing charges over his alleged role in a bribery scandal which led to the ousting of the ex-President Park Guen-hye.

It is alleged he made a large donation in exchange for government support of a merger of two Samsung subsidiaries.

He has been in prison since February over the scandal, but denies any wrongdoing.

READ ALSO – MARISSA MAYER MADE $239 MILLION WHILE WORKING FOR YAHOO!

At the final hearing, prosecutors called Mr Lee the “ultimate beneficiary” of crimes committed in the scandal.

Prosecutors have accused Mr Lee and four other executives of bribing Ms Park’s close confidante, Choi Soon-sil, with millions of dollars in exchange for presidential favours.

They are seeking terms ranging from seven to 10 years for his co-accused.

“The defendants were closely tied to power and sought personal gains,” the prosecutors said.

The prosecutors alleged the bribes were aimed at winning government support for a major restructuring of Samsung.

They said the restructuring would help to cement the leadership of Mr Lee, who was standing in as chairman for his ill father, Lee Kun-hee.

Mr Lee’s lawyers said the allegations were unjustified and the defendants never sought anything in return for the donations.

A court ruling is expected on 25 August.